When the Brigade Network’s NAC (National Advisory Council) reached out to the network to work on a theme for National Day of Civic Hacking, it was clear that our volunteers are moved by the power of criminal justice reform. Thanks in large part to Code for America’s amazing work in the criminal justice space with Clear My Record, our Network is informed about these issues and eager to do this kind of work in our own communities. When one of our neighbors is assigned a conviction, our system denies them equal opportunities to access housing, jobs, services, and dignity. We recognize that our whole community is suffering as a result. When that conviction is for an activity that is no longer considered a crime, we recognize that this is unacceptable.

In Hawaii, our islands’ indigenous Native Hawaiian root culture includes a conflict resolution practice known as “ho’oponopono.” It involves openly airing grievances, addressing injury, calls to accountability, forgiveness, and, ultimately, healing. Importantly, one of the root words for ho ‘o ponopono, “Pono” can be translated to “right” or “just.”

Our Brigade Network—consisting of more than 80 diverse Brigades distributed across the country—recognizes that need for justice is universal. We are lucky to have forged a national partnership with National Expungement Week, an organization that shares this belief and is planning their second annual series of record expungement events in nearly 40 cities across the country. 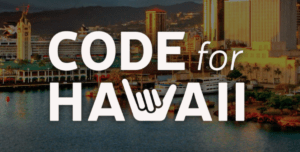 Code for Hawaii is building its National Day of Civic Hacking event on an existing partnership with ACLU Hawaii. For the past year we have been working together to develop an app called Holoholo, intended to clarify an individual’s rights with respect to assembly, cultural practice, protest and demonstration, and rest and relief on any given parcel of land in the state. The project is ongoing, but through our steady work together, our Brigade volunteers have learned more about the civic space and the lived experience of protesters, the houseless, and native practitioners whose rights are challenged and the local ACLU team has a connection to Hawaii’s technology ecosystem as well as Code for America’s national efforts.

Code for Hawaii is supporting a coalition led by the Hawaii Innocence Project and the ACLU of Hawaii to hold a record expungement event, where individuals with criminal records can consult with attorneys to file for record expungement. This is the first time any of the organizations involved have done an event like this, but because of the connections made through Code for America’s national partnership with National Expungement Week, Code for Hawaii’s local collaborations with ACLU Hawaii, the extraordinary determination of individuals who believe in the work, and a general spirit of service, togetherness, and aloha for our neighbors seeking relief, Hawaii will be hosting both a National Day of Civic Hacking event on September 21st and a National Expungement Week Event on September 28th.

A few weeks ago, Code for Hawaii and the ACLU teamed up for a hack night/project night to gather and verify basic information and stand up a website for the event. At our event on September 21, we hope to develop a form to help attorneys pre-screen clients for appointments on the 28th, map out the paths to record expungement in Hawaii and study the existing application process through a user research lens.

If all goes according to plan, the student and volunteer attorneys with the Hawaii Innocence Project will address an injustice within our legal system for dozens of people and set them on the path to a second chance. Our work will roll up to the Code for America and National Expungement Week’s collective work in helping hundreds, perhaps thousands start on this path around the nation.

But the work here holds special significance for us locally as well. Hawaii as a state has complicated history with justice and the U.S. court system as evidenced by the ongoing struggle at Mauna Kea, where Ki’a’i are fighting for the right to exercise and practice an indigenous worldview. With much healing to do, seeking justice at the individual level—even for a few dozen in a state of over a million—is much needed practice.

Through National Day of Civic Hacking and National Expungement Week, our communities are learning how to come together to acknowledge flaws in our system and work together with those affected to begin correcting them. While I am not a practitioner or expert, I believe this is in the spirit of ho’oponopono. As much as these events are exercises in user-centered design and the application of legal expertise, they are also exercises in healing. For us in Hawaii, healing holds the promise of finding common ground on issues like the Thirty Meter Telescope while ensuring the vibrancy of our indigenous root culture that makes us special. To quote Allen Iverson, that’s practice I’m excited about.