A criminal record creates lifetime barriers for people trying to move forward with their lives, meet basic needs, and thrive in their chosen field.

We’re working to help solve this issue by partnering with courts, criminal history repositories, executive branch agencies in state governments, policymakers, and advocacy groups to design and implement new record clearance policies. Our goal is to make automatic record clearance—where the state initiates and completes the clearance of all eligible criminal records—the standard across the country.

The importance of record clearance

One in three people in the U.S. today have a criminal record that appears on a routine background check. Decades of federal, state, and local criminal legal system policies and practices—like the War on Drugs and mass incarceration—that disproportionately target Black people and people of color have made it so that criminal records are more common in these communities.

A criminal record can be a life sentence to poverty, creating barriers to jobs, housing, education, and more. These barriers create ripple effects for generations: nearly half of all U.S. children have at least one parent with a criminal record. This reality causes negative consequences for a child’s cognitive development, school performance, and even employment outcomes in adulthood.

Nearly every state has existing laws that allow people to petition to seal or clear their criminal record after a certain amount of time. Unfortunately, the petition process to clear criminal records in most states is complicated and burdensome—and often costly. For people with low incomes, expensive legal assistance and court fees can make this process impossible.

As a result, only a tiny fraction of people eligible for expungement or sealing ever obtain the relief they need. Tens of millions of people are blocked from moving forward with their lives because of their criminal record.

At Code for America, we believe that government at all levels can and should work dramatically better than it does today. That’s why, with our experience and learnings, we work with state governments to remove these burdens and increase life opportunities by supporting states in implementing automatic record clearance from beginning to end.

In 2016, we launched an online intake tool to connect people with the legal aid they need to navigate California’s expungement process. With this tool, our team helped 27,000 people get connected to legal aid services. But we also saw firsthand how the petition-based process wasn’t working. We wanted to go beyond tweaking the status quo to re-envision the whole process of record clearance so that it would be accessible to anyone and everyone who needs it. So in 2018, we shifted our focus to automatic record clearance.

Millions of people
can get the job or housing they were previously blocked from.

The Clear My Record team works with communities, advocates, and  government to leverage technology and human-centered design to advance automatic record clearance. The goal of this work is to clear all eligible criminal records in the U.S.

After we realized petition-based processes couldn’t scale to meet the current need, we partnered with the San Francisco District Attorney’s Office to create a process for automatic record clearance. We developed technology that reads criminal history data, determines eligibility for relief under state law, and produces the necessary documentation for courts. This work expanded to become a first-of-its-kind partnership with five District Attorneys’ Offices in California. 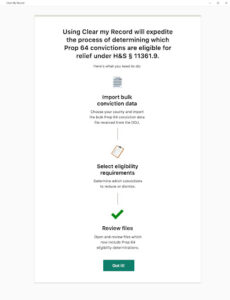 When the state passed a new cannabis record clearance law, we released the technology to District Attorneys statewide. The free, open-source application combs through criminal history data to find people eligible for record clearance—at a speed of up to 10,000 eligible convictions per minute.

To date, this Clear My Record technology in California alone has helped identify 144,000 records for clearance—two-thirds of all eligible cannabis convictions in California.

This work became part of a new era for record clearance policies in America. We began to see a future in which eligible records would be cleared automatically as a routine function of government. To get there, we needed to think big, and our work in California showed that it was possible.

Code for America is a founding member of the Clean Slate Initiative. This bipartisan national movement supports state legislative campaigns to move away from relying primarily on the petition-based record clearance processes and move towards automated clearance processes that are initiated by government. The initiative also works to expand the number and types of records eligible to be cleared.

Using the learnings and momentum from California, Clear My Record has now worked with over twenty states to help design impactful and implementable automatic record clearance policies, and we are partnering with government to build the technology that implements them.

After Utah’s automatic record clearance policy was passed, Clear My Record partnered with the state to build technology that would implement the law. Ultimately, this technology is helping clear approximately 600,000 criminal records in that state alone, and providing another proof point for the possibility of automatic record clearance to remove barriers at scale. In total, our technology and design services will help clear the records of millions of people across the country.

In addition to Utah, automatic record clearance, also known as “Clean Slate” policies, are now in place in states like Pennsylvania, Michigan, Connecticut, California, and Delaware. But there is still work to be done. We need to ensure laws are implemented effectively, and more policies need to change across the country to fundamentally improve the process of record clearance.

With the right policies and the conscious use of technology, government can deliver impact at the scale we need. Ultimately, this work is not just about creating efficient ways to change criminal record data. It is about changing lives.

Listen: The impact of a criminal record

We spoke to people across the country living with a criminal record. In this audio series, hear them describe in their own words the impact of a conviction on their employment prospects, housing situations, and mental health.

Ushering in a new era for record clearance, and what's next for relief

What people are saying about Clear My Record

Are you a government official interested in partnering with us? Get in touch

Can you help us remove barriers to opportunity for people impacted by the criminal legal system?