The Clear My Record team at Code for America has been working on criminal record expungement in California for the past two years, helping over 5,000 people apply to clear their records across 14 California counties. California has the most generous record expungement laws in the nation, which is why it was an ideal place to launch our effort. But there are other states with laws allowing people to clear their records, and we estimate that there may be over 5 million people outside of California who are eligible under their state’s laws and motivated to apply, because their records are making it challenging to achieve their goals. Ohio was one state we identified with favorable laws and over 400,000 potential eligible and motivated applicants, so we set out to learn about the state of record clearance in Ohio, what it looks like on the ground, and how we can help.

Our first stop was Cincinnati, OH, where the Public Defender’s office runs a Fresh Start clinic for people seeking to clear their criminal records. We learned about the process the attorneys used to assess eligibility, and how they determined financial qualification for free assistance and waiving the filing fees.

One thing we learned at the clinic is that simply obtaining the relevant information about a person’s record is a big barrier in the process. Once you have the details for each case (what law was violated, what was the degree of the conviction, date of conviction, how long ago was the sentence completed), the rules for determining eligibility are not too complicated. However, actually finding those details was not always straightforward. First of all, there are multiple sources of truth for a person’s criminal record, and they don’t always agree. At this particular clinic, they asked people to bring their “blue sheet” (a copy of their record obtained from the sheriff’s office), but the attorneys also referenced the records in their own case management system, as well as the court’s online records. The most time consuming part of the process we observed was the attorneys sifting through these various records to find missing information, reconcile differences, and make sure they had all the right information to make an eligibility assessment, which was then double or triple checked by different people.

Despite those challenges, the clinic had a very streamlined process and was able to help dozens of people in the few hours we observed. The camaraderie and teamwork in the clinic as they worked together to help as many people as possible through the process was inspiring to observe. 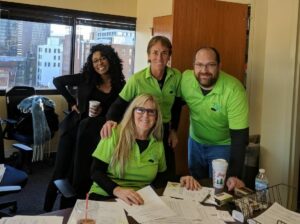 The next day we headed to the Hamilton County Courthouse in Cincinnati to observe some expungement hearings and see what we could find out about records access and petition filing in the clerk’s office.

The first hearing we observed was in Courtroom 270, with Judge Fannon Rucker presiding. The applicant was petitioning to have two minor drug possession charges on his record sealed. When we arrived at the courtroom, we looked at the electronic schedule posted at the courtroom door and were surprised to see that there were 70 cases scheduled for 9am, with only 90 minutes until a jury trial scheduled at 10:30, working out to slightly over a minute per case!

When the judge arrived in the courtroom, he began working through the hearings with astonishing speed and efficiency, granting continuances and accepting pleas. When the expungement case came up, the petitioner had only about 20 seconds to tell the judge about how he had gotten a professional certification and needed to get his record sealed in order to get a job. With no objections from the prosecutor, the expungement was granted and the hearing was over in less than 1 minute.

The other expungement hearing we observed, in a different courtroom, did not go as well for the applicant, who owed unpaid court fines and fees on one of the cases. The judge denied the petition, stating “an outstanding balance on one means no expungements on any.” Unfortunately, this illustrates a common catch-22 that record clearance applicants find themselves in: they can’t get a job because of their criminal record, but they can’t clear their record until they pay their outstanding court fees, which they can’t afford to pay because they don’t have a job! 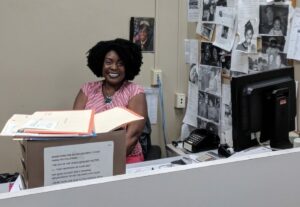 After observing the hearings, we made our way to the clerk’s office, asking where we would go to file expungement paperwork. Eventually, we were directed to a small windowless office at the back of the clerk’s office, with a sign on the door reading “Expungements”. Wandering in, we met Denise Burks-Scott, a tireless public servant who has been handling expungement filings for 22 years! She goes to great lengths to help applicants who come to the Hamilton County Courthouse for felony expungements, letting them know how to fill out the paperwork, double checking their eligibility, and setting expectations about the process and outcomes. “I see the struggle every day,” Denise told us, referring to applicants who come to her distraught because their criminal records are holding them back from critical opportunities. She tries her best to help, processing on average 30–45 applications per month, but when people aren’t eligible for expungement, she directs them to another office where they can file applications for a Certificate of Qualification for Employment, or CQE.

The CQE is another option for lifting barriers to employment and professional licensing for people who do not qualify for record sealing in Ohio. The CQE allows employers to hire candidates with criminal records that would otherwise be prohibited, and protects the employer from negligent hiring lawsuits. Since it was introduced in 2012, around 750 CQEs have been granted across the state, and only 4 have been revoked due to a subsequent felony conviction. One recent study found that having a CQE made an applicant more than 3 times more likely to be offered a job interview!

The Clear My Record team, Code for Dayton, and Community Action Partnership strategize on how to collaborate on record expungement

The final stop on our trip was Dayton, OH, where we met with the Code for Dayton volunteer brigade, who inspired us with their laser-like focus on trying to help their local Dayton community grappling with “rust belt woes.” We also met with Community Action Partnership, an organization that provides a variety of services in the greater Dayton area, including a newly-launched legal aid clinic. We learned a lot from CAP about their approach to providing services. We learned the CAP encourages expungement applicants to get a state background check, which provides all their case information in a consistent format, instead of going courthouse to courthouse to gather their records for each case. The downside is that the state background check costs $35 and has a wait time of up to 2 weeks. Another great service that CAP provides is financial assistance for applicants who are unable to pay their outstanding court costs, blocking them from completing the expungement process.

We finished our trip energized by the amazing work we witnessed from people on the front lines helping Ohio residents with record expungement. Now we are taking what we’ve learned and trying to figure out how we can use technology to help amplify and scale the work of local providers to make record clearance accessible to all eligible Ohio residents.