Ben Treviño is an experienced executive, entrepreneur and technologist, and is a committed advocate for the public sector and civic engagement.

Previously, Treviño has served as the President and CEO for the Hawaii Institute for Public Affairs (HIPA) as well as the Sustainability Planner with Honolulu Authority for Rapid Transportation (HART) where he developed a community-driven sustainability program as one of Code for America’s first Community Fellows in 2018. Treviño was the founding President and Chief Operating Officer of Bikeshare Hawaii, which launched the Biki bikeshare system in Honolulu in 2017. Prior to that, Treviño was with the University of Hawaii Economic Research Organization (UHERO) where he was the architect of the UHERO Dashboard Project, a community data visualization portal for Hawaii data. Additionally, he was a co-founder of Interisland Terminal, a Honolulu-based, non-profit organization with projects including community spaces, the Kaka‘ako Agora, and R&D Bookstore and Cafe. Treviño also has held previous positions with Pacific Resources for Education and Learning, the Hawaiʻi International Film Festival, and Google.

Treviño earned a Bachelor of Science (BS) degree in Computer Science from Stanford University and a Master of Business Administration (MBA) degree from the Shidler School of Business at University of Hawaii at Manoa. He is a member of the inaugural class of Obama Leaders Asia-Pacific, the 6th Cohort of Omidyar Fellows, and was recognized as a member of the Pacific Business News Forty under 40 Class of 2016. Treviño serves as the co-chair for the National Advisory Council with Code for America as well as on serving on the boards of The Entrepreneur’s Foundation, The SEEQS (The School for Examining Essential Questions of Sustainability) Foundation, the organizing committee for the Code for Hawaii brigade, and the advisory boards of Common Cause Hawaii, and Sustainable Transportation Coalition of Hawaiʻi. He has been commuting by bike in Hawaii for fourteen years and is committed to deepening his understanding of and drawing attention to indigenous knowledge systems as solutions to Hawaii’s most difficult challenges. 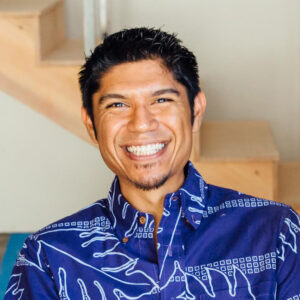