Shalaka is a Senior Product Manager at Code for America. She previously worked at Tala, launching the micro-credit product for India, while based in Bangalore. She was also involved in founding Tala’s Liberation committee focused on building equity within the organization, and is an avid workshop facilitator for teams, focusing on building empathy between folks across different teams, cultures, languages, and perspectives. In her time outside of work, Shalaka is a rock climber, burgeoning climbing guide, thali enthusiast and novel reader. Originally from the East Bay Area, Shalaka graduated from the University of Southern California with her B.S. in Business Administration, where she was also a Brittingham Social Enterprise Scholar. 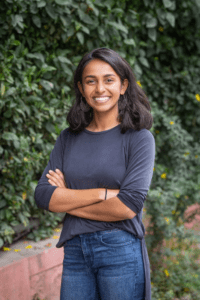