Tamara Shopsin is a graphic designer specializing in problem solving and conceptual illustration. Tamara’s work has been featured in The New York Times, Good, Time, Wired, and Newsweek. She has designed book jackets for authors including Jorge Luis Borges, Charles Lindbergh and Vladimir Nabokov. Two volumes of her drawings have been published under the titles C۪est le Pied! and C۪est le Pied II. In her spare time she creates and sells novelties and cracks eggs at her family۪s restaurant. 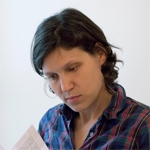