Every year, families with low incomes leave a combined $10 billion of tax credits on the table by missing out on the Earned Income Tax Credit (EITC). One in five eligible households aren’t getting the EITC they’ve earned. Closing participation gaps in the tax system like that has been our goal since the Code for America Tax Benefits program launched nearly three years ago.

We’re taking a big step towards that goal today by adding functionality to GetCTC, our free simplified tax filing tool, to allow eligible families and individuals to claim the EITC. Before now, people could use GetCTC to claim the Child Tax Credit (CTC) and the third stimulus payment—but not the EITC. Clients who opt to claim the EITC through GetCTC will have to provide W-2 forms, which they did not need to do if they used the tool in the past.

Families who do not want to claim the EITC or who are not eligible for it (including families in Puerto Rico) can still use GetCTC as they have all year to claim the CTC and (outside of Puerto Rico) stimulus payments—without submitting a W-2.

Now when they use GetCTC, clients will be asked if they want to try to claim the EITC, then answer a few questions to confirm basic eligibility. If they do want to claim their EITC, we’ll walk them through the process of reporting their W-2s —before asking about CTC and stimulus payments, and collecting payment and mailing information. The process also allows clients to claim any tax withheld on their W-2s.

More money is on the line now for families than ever before: A family of five who did not file last year can now claim nearly $25,000 from filing through GetCTC. But time is running out. We can only operate GetCTC through the close of the e-file season for the Internal Revenue System (IRS), and the last day for new clients to file on GetCTC will be November 15. The expanded Child Tax Credit has already been transformative for America’s families—but many of those most in need still haven’t received their money. Let’s redouble our efforts in these last five weeks. It’s up to all of us to ensure that this historic benefit reaches its full potential, to make sure that every family knows that this assistance is available, and that it takes just fifteen minutes to claim it. Please join us, and do everything you can to send families to GetCTC.org before the November 15 deadline. 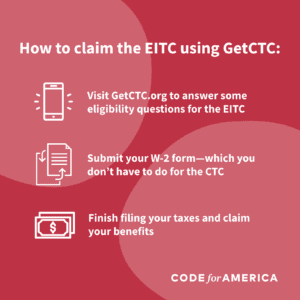 How will the EITC change the GetCTC experience for clients?

We know from GetYourRefund, our free tax filing assistance program, that finding tax documents and reporting income is a major barrier for new and intermittent filers. That’s why this functionality is an experiment, and we will be tracking what happens carefully as a sign of what must come next in filing reforms.

With GetCTC, households with low income are able to use “simplified filing,” allowing them to claim the CTC and stimulus payments without providing tax documents like W-2s or reporting income data. The simplicity of the process allowed over 115,000 families to claim an estimated $440 million over 10 weeks in fall 2021.

Why add the EITC if it’s not simplified?

First, the EITC is a famously hard-to-navigate credit—and we wanted to expand the client experience of GetCTC to the EITC, making it as simple as possible to claim under current IRS constraints.

Second, we want to make life easier for our outreach partners. We have heard that CTC outreach is a delicate balance, as partners are hesitant to encourage households with income to use GetCTC and leave their EITC on the table. Now all clients can go to GetCTC for the last month of the filing season and claim nearly all relevant federal tax benefits.

Third, we want to learn exactly what happens when we add income reporting to simplified filing. We will be carefully tracking whether households opt to try and claim EITC, if they get stuck along the way when we ask for W-2s, and what type of assistance they may need. If clients do struggle with their W-2s, it will underscore what we have argued before: that, in order to increase filing rates, the IRS should use the data they already have to calculate the EITC amount on behalf of W-2-only taxpayers with low incomes. This would be true simplified filing for the nation’s largest anti-poverty program.

With this new feature, we hope to help as many people as possible access all the federal tax benefits that are waiting for them—all in service of our goal of closing the tax benefits participation gap. We also hope that this experiment opens new pathways to thinking about the future of filing reform—pathways that center client’s experiences, remove barriers, and make government work more efficiently for everyone.

The last day for new clients to file on GetCTC will be November 15. Can you get the word out? Visit GetCTC.org/navigators to find out how you can help more individuals and families access their tax benefits.