Los Angeles County is the most populous county in the United States, and among its 10 million residents, there are a lot of people who need benefits.  LA County delivers SNAP food assistance (known as CalFresh in California) to more than one million under-resourced people every year.  But even as the county serves that enormous population, there are some people who haven’t gotten the benefits they deserve because of obstacles in the enrollment process. One consistent reason people are denied benefits is that they are unable to complete the required interview. So the county decided to test something new: flexible interviews.

Identifying the problem: one in three applications in LA were denied for a missed interview

In October 2018, GetCalFresh.org launched as a digital assister in LA County to help residents enroll in CalFresh, California’s name for the SNAP food assistance program. Since then, GetCalFresh has assisted on more than 750,000 CalFresh applications in LA. At the beginning of our partnership, the LA Department of Public Social Services set an approval rate goal of 60%, up from their average approval rate of 48%. In the summer of 2019, the GetCalFresh team dug into the data to help LA understand their approval rate and found that missed interviews drove the low approval rate, with one in three applications in Los Angeles County denied for this procedural reason. (For comparison, only 6% of LA applications were denied for ineligibility.) Roughly 10% of applicants who were denied for missed interviews reapplied for CalFresh within six months of their original application.

This was concerning for two reasons. First, it was inefficient for county workers to process some applications twice, adding to their already significant workload. Second, the low reapplication rate means that a significant number of people gave up on the process after their missed interviews and didn’t get the benefits they needed.

Completing the interview, during which a county eligibility worker confirms and clarifies an applicant’s circumstances and eligibility, was a particular obstacle for college students, working families, and individuals experiencing homelessness. Nearly 40% of students and working families, and 34% of applicants experiencing homelessness, were denied because of a missed interview, compared to the county’s average of 31%.

GetCalFresh also surveyed applicants who were denied for missed interview, and found that:

Learning about missed interviews: understanding both the client and worker experience

Our next step was to deepen our understanding of the data with on-the-ground observations of county processes and operations. GetCalFresh researchers spent more than 80 hours shadowing and interviewing case opening clerks, eligibility workers, supervisors, and office leadership to understand the priorities, challenges, and day-to-day experience of delivering CalFresh benefits in LA County. Here’s what we observed:

Meanwhile, clients regularly reported difficulties as they attempted to contact their caseworker. Voicemail boxes are often full or not set up. When clients were able to leave a voicemail, they reported that they weren’t sure when they should expect to hear back from their caseworker, which led to increased anxiety and frustration. These difficulties aren’t unique to Los Angeles. Across California, the interview is the most significant procedural obstacle in the CalFresh enrollment process.

A messy problem like this is an opportunity to think big about possible solutions. With our LA partners, we wondered: What if applicants could just call their workers at a time that was convenient for them? Could LA implement a flexible, responsive interview service that served clients better and also increased efficiency?

LA County already had an alternative application process called “end-to-end” in which a CalFresh applicant could place a call, connect to a worker, complete an application over the phone, and receive a determination—all within a single phone call. By the summer of 2020, our collaborative big idea was to expand access to the “end-to-end” line to applicants assisted by GetCalFresh.org, representing over 25,000 households per month. Big indeed! With help from GetCalFresh, LA County could become the state model for how to conduct flexible SNAP interviews.

LA DPSS staff and GetCalFresh team members dove into the work of designing a brand-new client and worker experience, taking into account policy, operations, and technological considerations as well as service delivery and (most importantly) the client experience. Meanwhile, LA County trained 300+ caseworkers on how to work the “end-to-end” line in anticipation of the huge increase in volume. 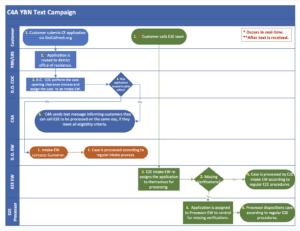 LA DPSS process map on the new interview experience for clients and caseworkers.

When it came to implementation, though, we wanted to start small, learn as we went, and iterate on our learnings. We planned a gradual rollout over four weeks as we piloted the flexible interview process in a few county offices to a limited number of applicants at a time.

Code for America’s original timeline for the pilot expansion.

That timeline ended up being extremely optimistic! In practice, the rollout extended for many months, with full access for all GetCalFresh-assisted applicants finally implemented in May 2021. The small steps allowed GetCalFresh to smooth out processes and gave LA County time to fine-tune their staffing model to accommodate the gradual increase in usage over time. Throughout the rollout, GetCalFresh maintained a data dashboard that allowed LA County to monitor usage and impact for clients and county operations in real time. 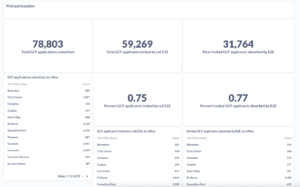 Data dashboard so that LA DPSS can monitor the pilot’s performance real-time.

In order to measure the impact of the flexible interview pilot on client outcomes, GetCalFresh partnered with researchers Tatiana Homonoff (New York University) and Jason Somerville (Federal Reserve Bank of NY) to design a randomized controlled trial. Applicants who consented to receive text or email messages from GetCalFresh were randomly assigned to either the treatment condition (in which they would receive messages inviting them to call the flexible interview line) or else the control condition (in which they would receive the status quo messages and interview process). Any applicant in the treatment condition who did not call the flexible interview line within a specified timeframe would default to the status quo interview process. 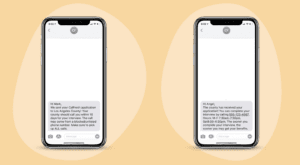 Clients in the flexible interview line pilot received a different text message with the option to call on their own schedule.

The results show that the flexible interview line improves outcomes for CalFresh applicants at levels that are both statistically significant and practically meaningful. Some key takeaways:

The success of the flexible interview pilot shows that large county departments can successfully plan, implement, and evaluate major changes to their business processes.

Real-time text messages were extremely effective in reaching customers when they were available and most motivated to engage with the county. LA County’s flexible interview pilot shows that when clients can engage with county workers at a time that they choose, they have a higher chance of successfully enrolling in CalFresh. This observation alone is a critically important contribution to the ongoing project of delivering government benefits equitably and respectfully.

But there is a process learning here, too. The success of the flexible interview pilot shows that large county departments can successfully plan, implement, and evaluate major changes to their business processes. They can do this in a way that centers the client experience and optimizes client outcomes while actually improving efficiency for caseworkers and streamlining their business processes.  LA County proved that government can think big, start small, and use technology in a meaningful way to get more benefits into the hands of people who need them. 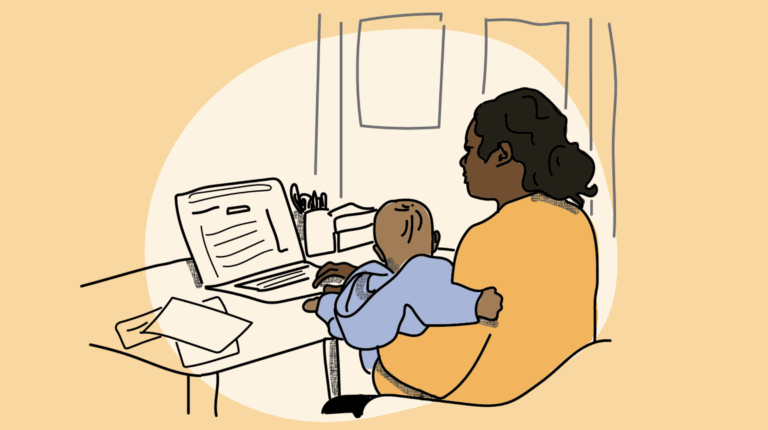 What Happens When People Feel Ownership Over Their Benefits
August 31, 2021 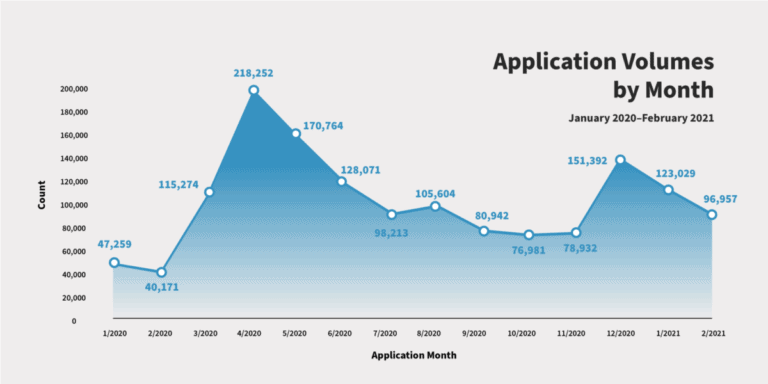 One Year In: COVID-19 and Food Assistance by the Numbers
March 11, 2021
White House Invites Code for America to Participate in Conference on Hunger, Nutrition, and Health
September 26, 2022